The last race of the Road America weekend series was also a night race and even on the full track.  Our plan was to hang out with friends and race one last time at Road America and get one last change to see how we measure up.  I looked at my notes and set up the kart with the lessons I learned from the last Mid-America race there.  I anticipated a good night of racing.

The evening started off a little sketchy with light rain early on.  Thanks to the hard work of the Road America folks the track was dry enough to get a single practice in.  For us it went reasonably well.  Jason was setting competitive lap times, so no kart adjustments were made.  There were nine drivers – 6 veteran and 3 new guys.  During practice they ran all of the Briggs classes at once.  It was quite something to hear and watch as they roared around the track. 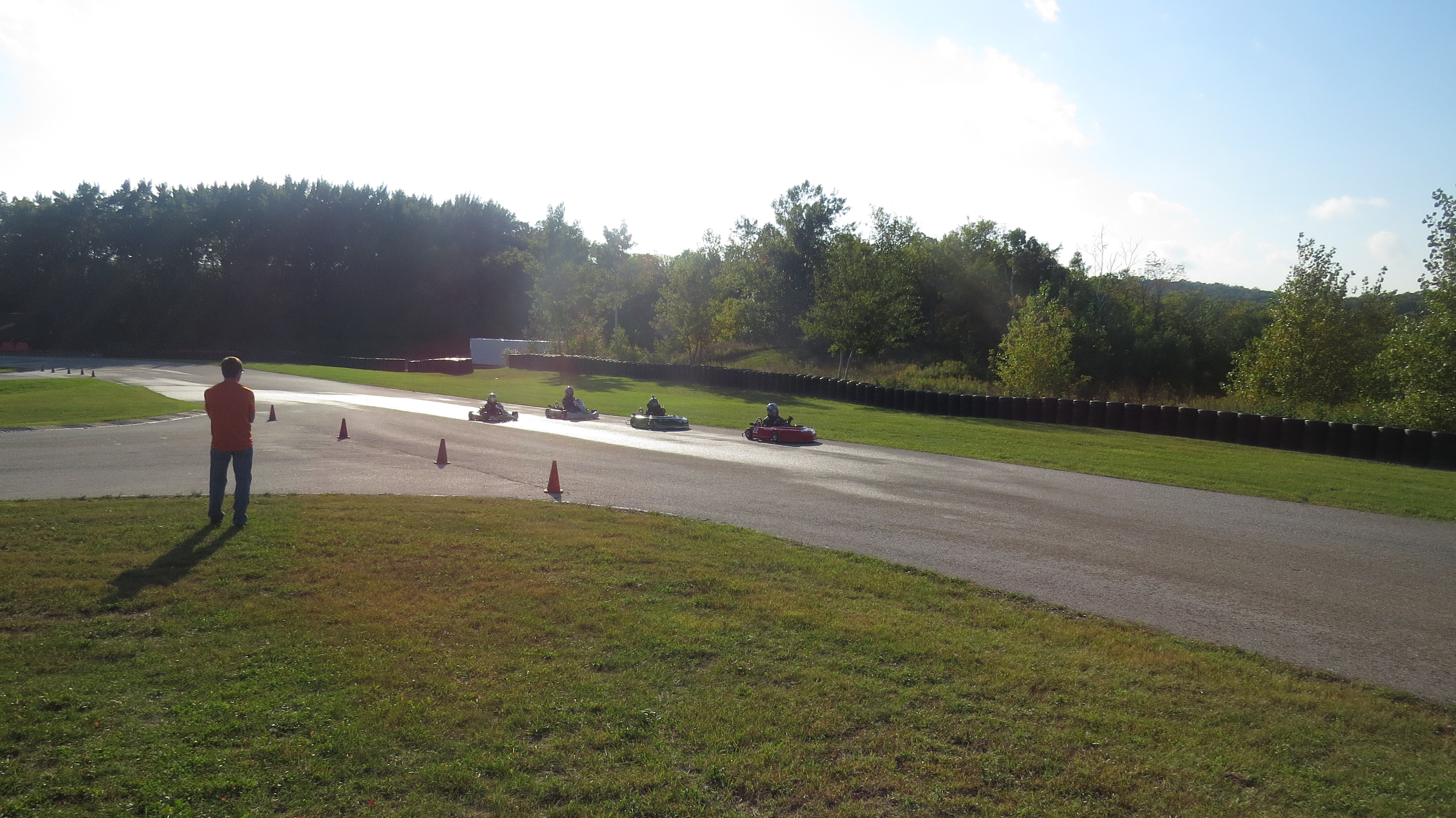 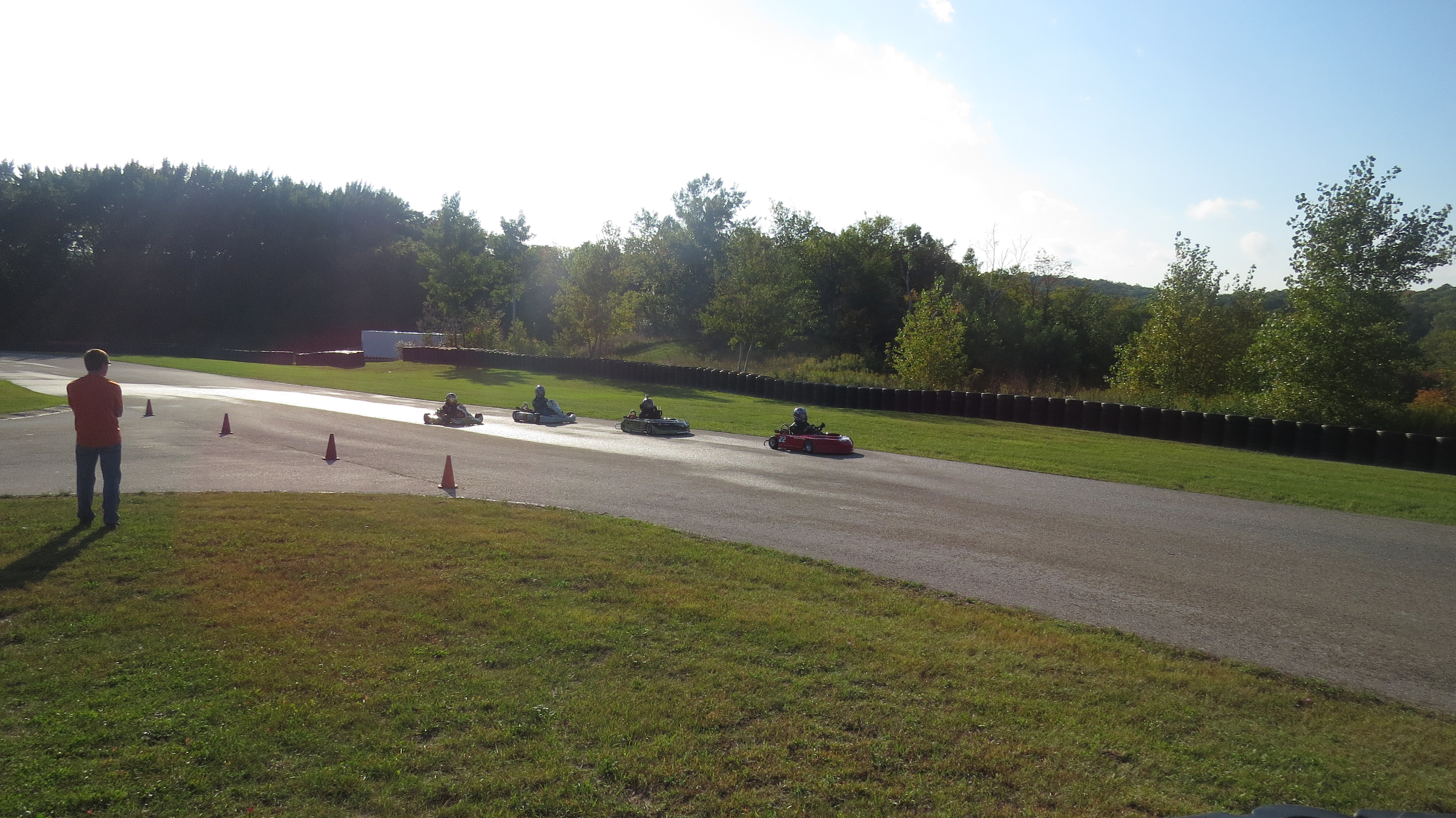 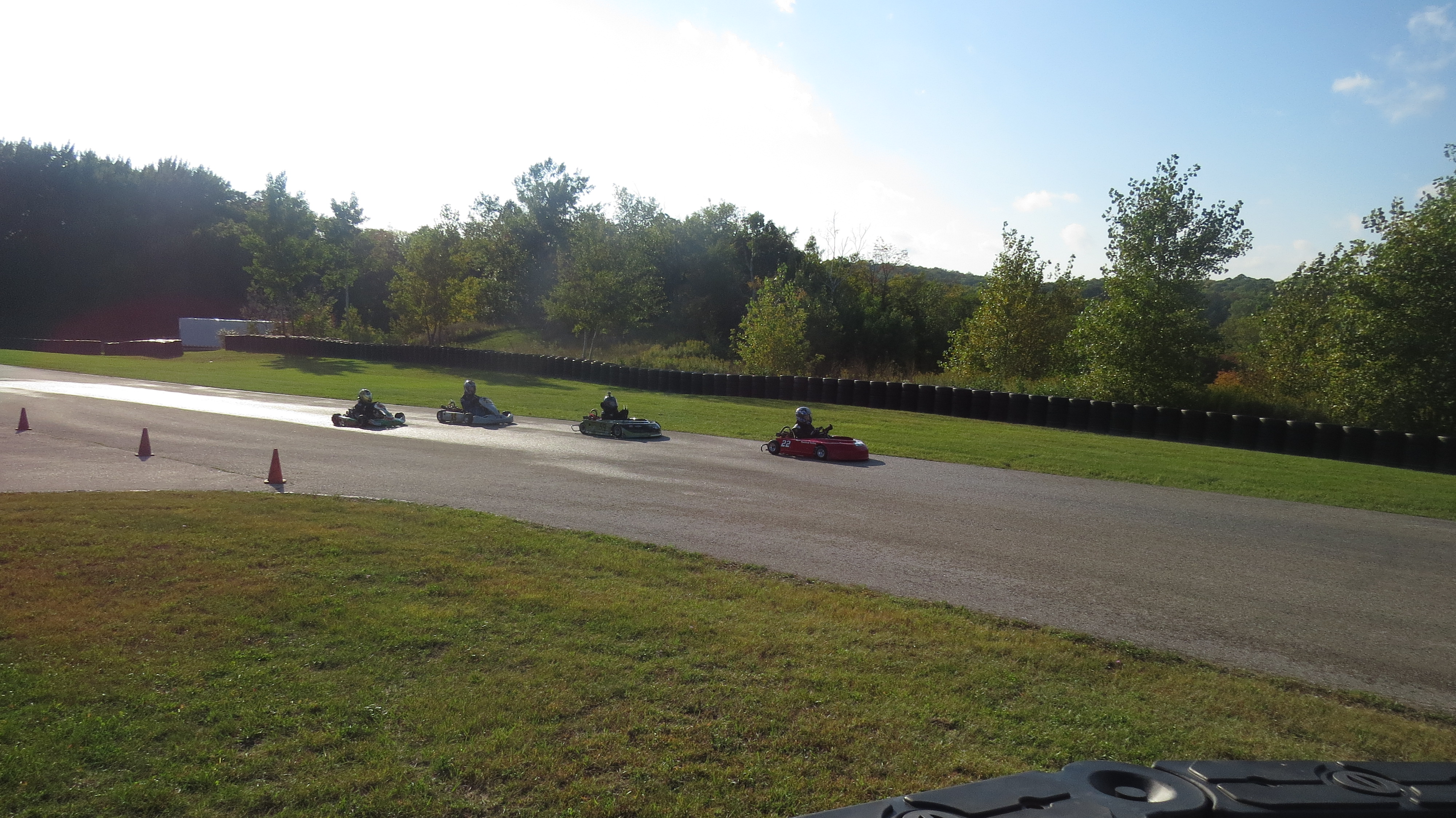 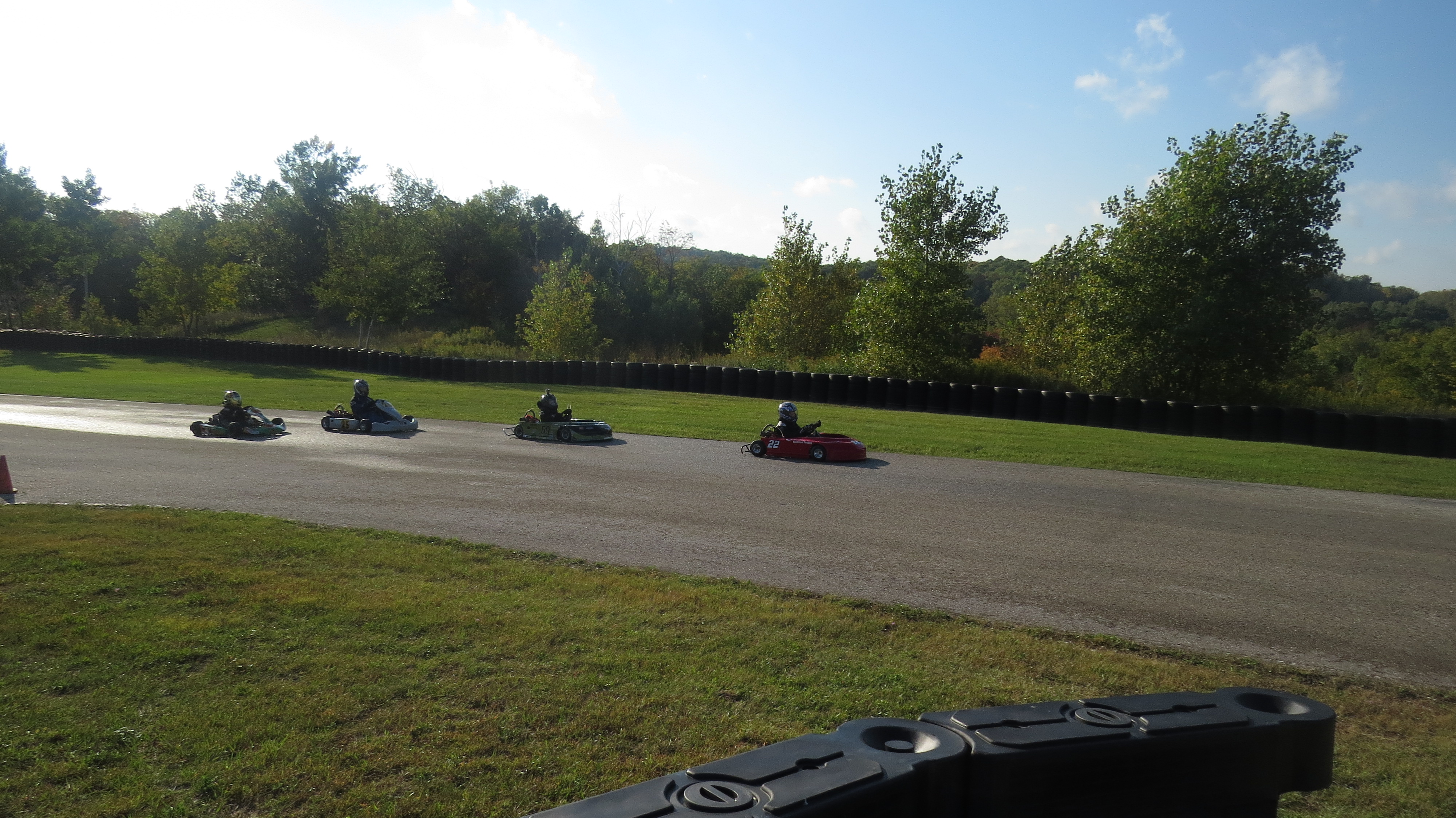 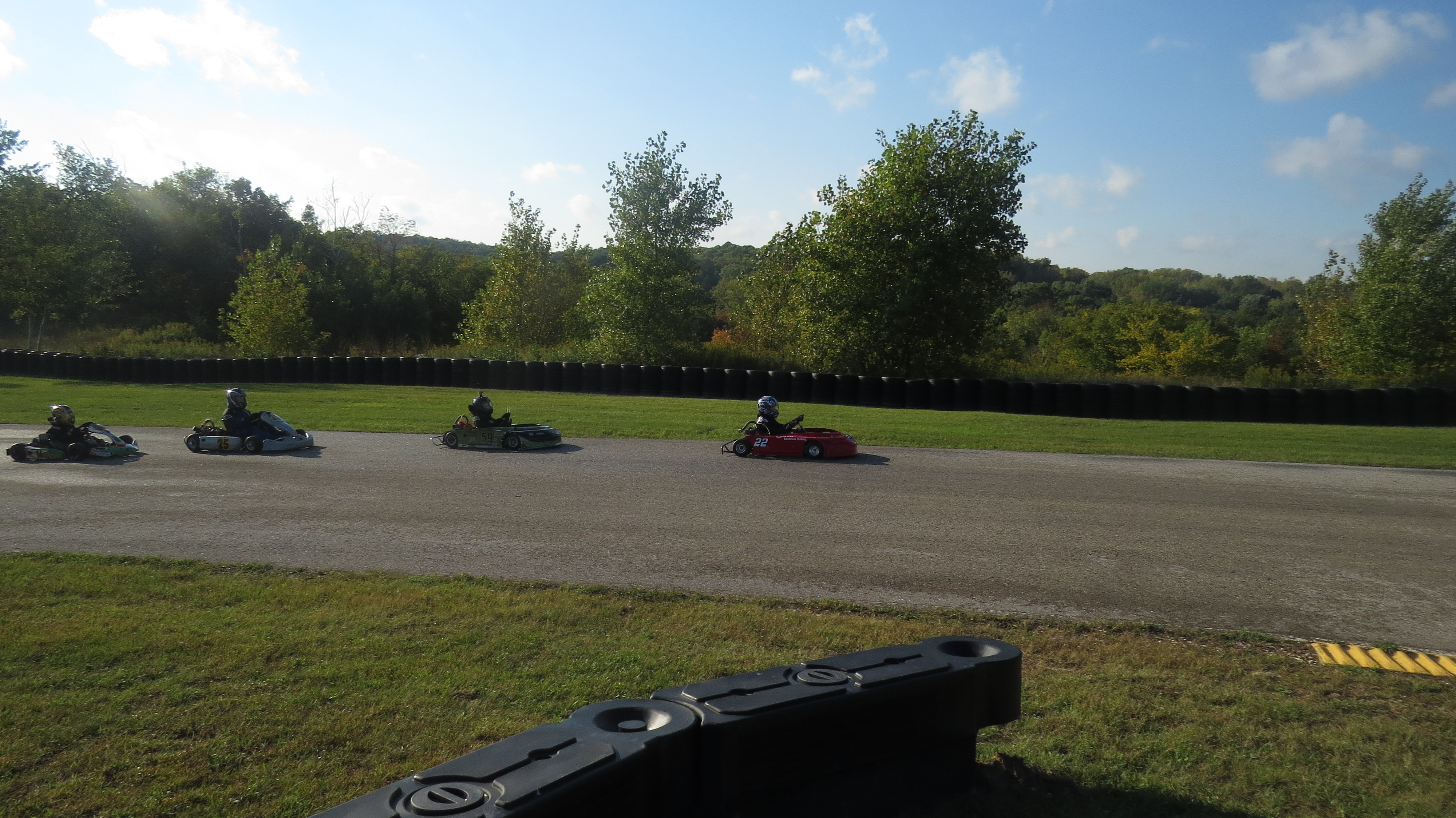 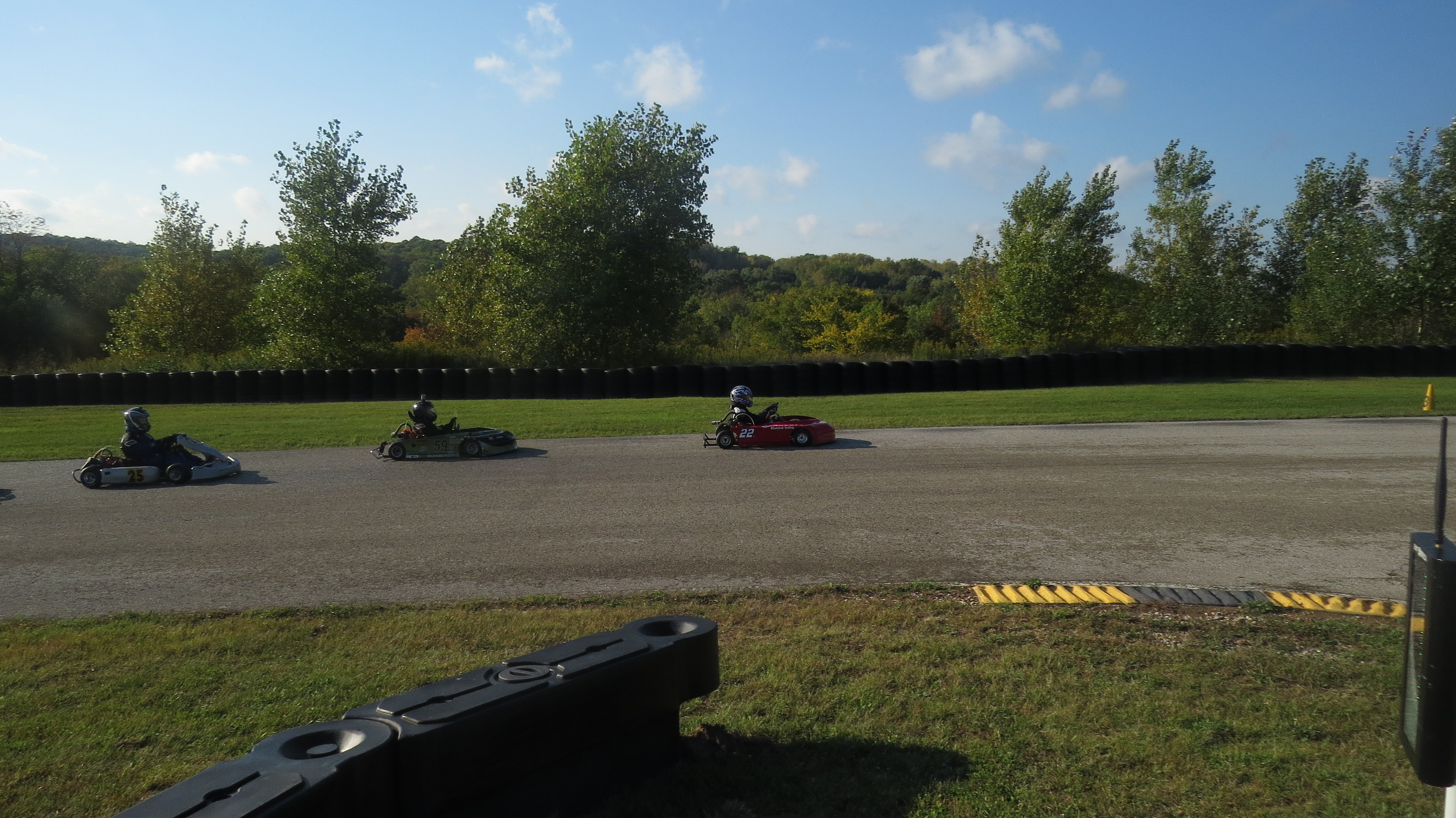 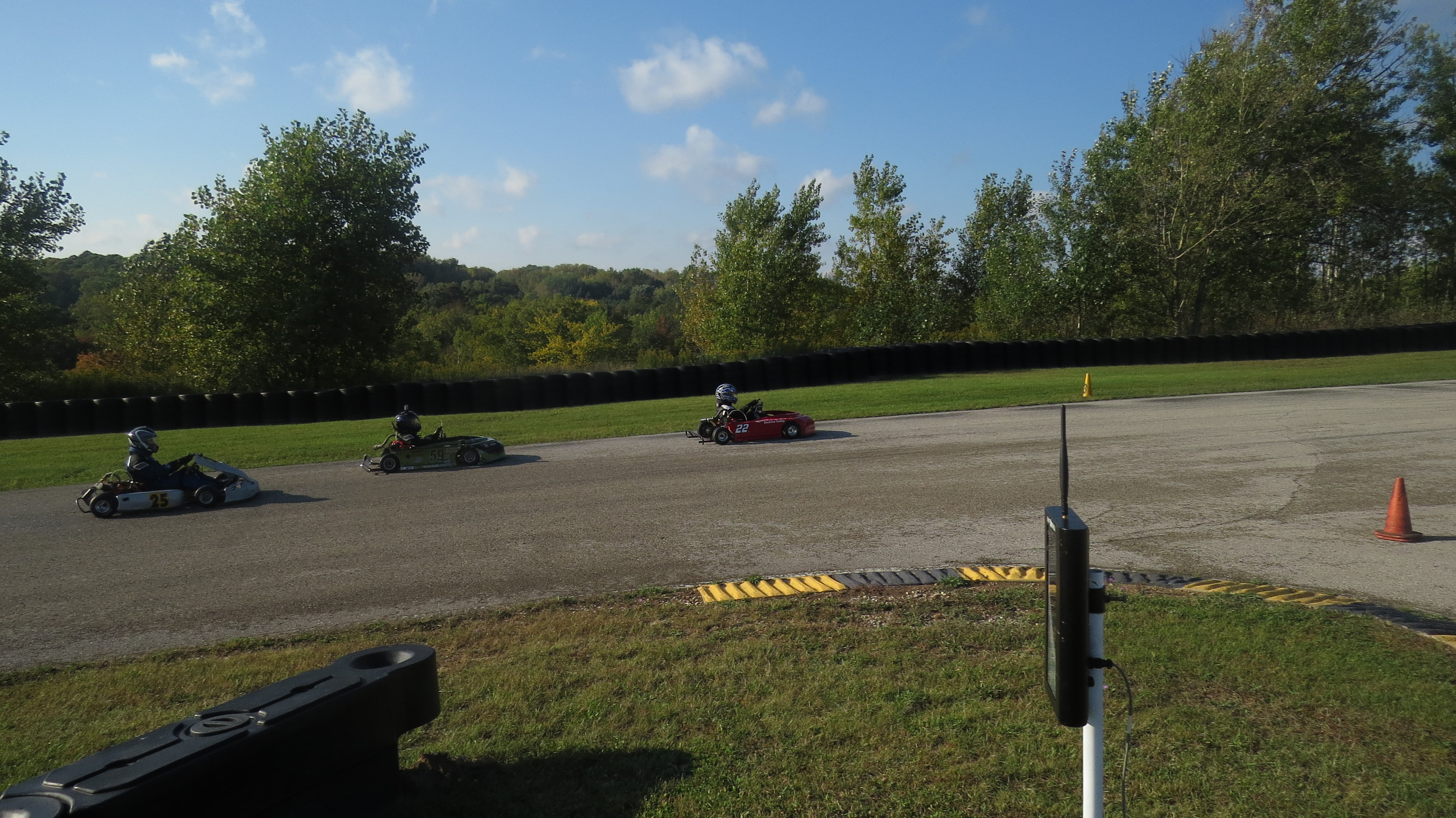 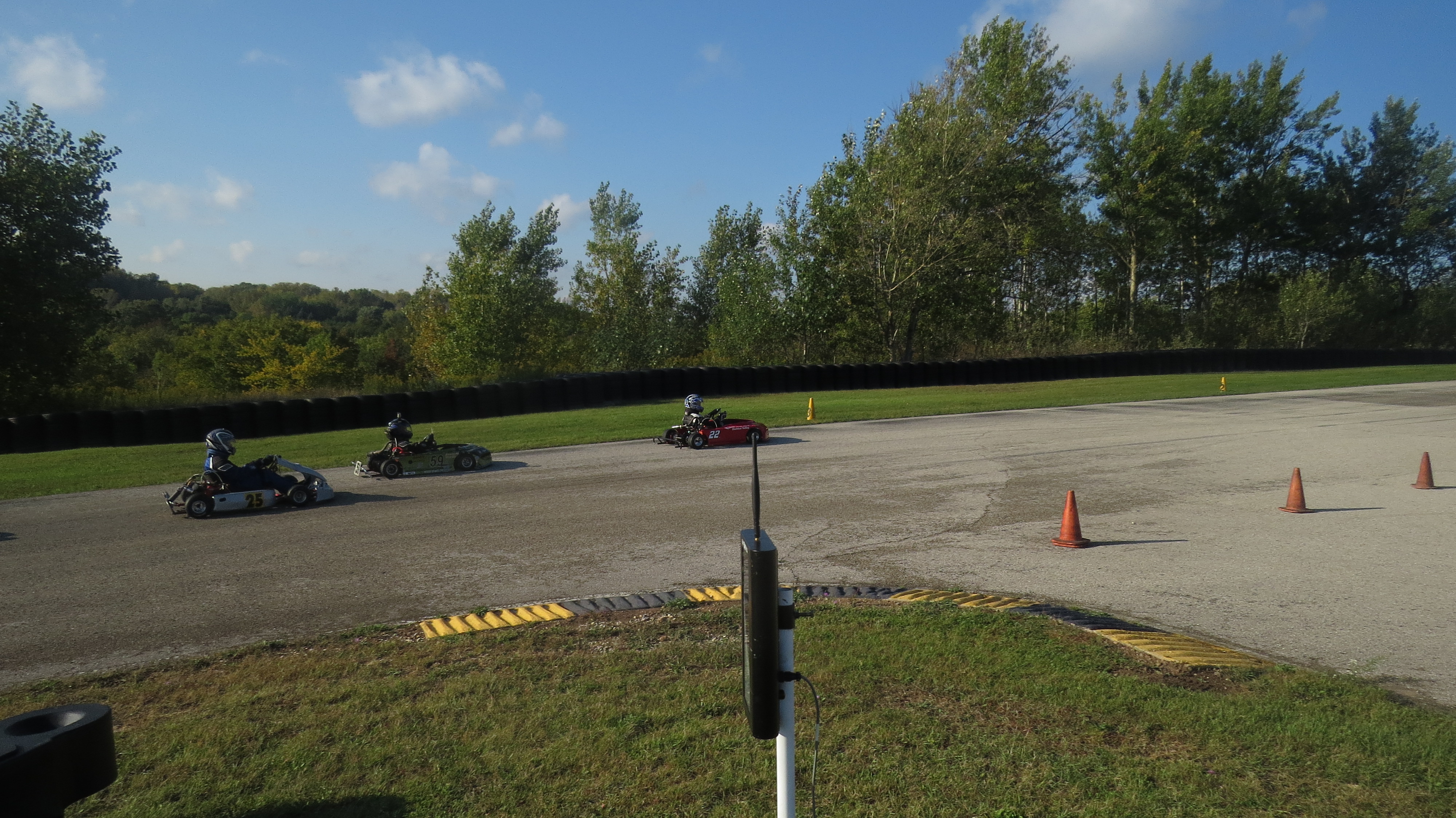 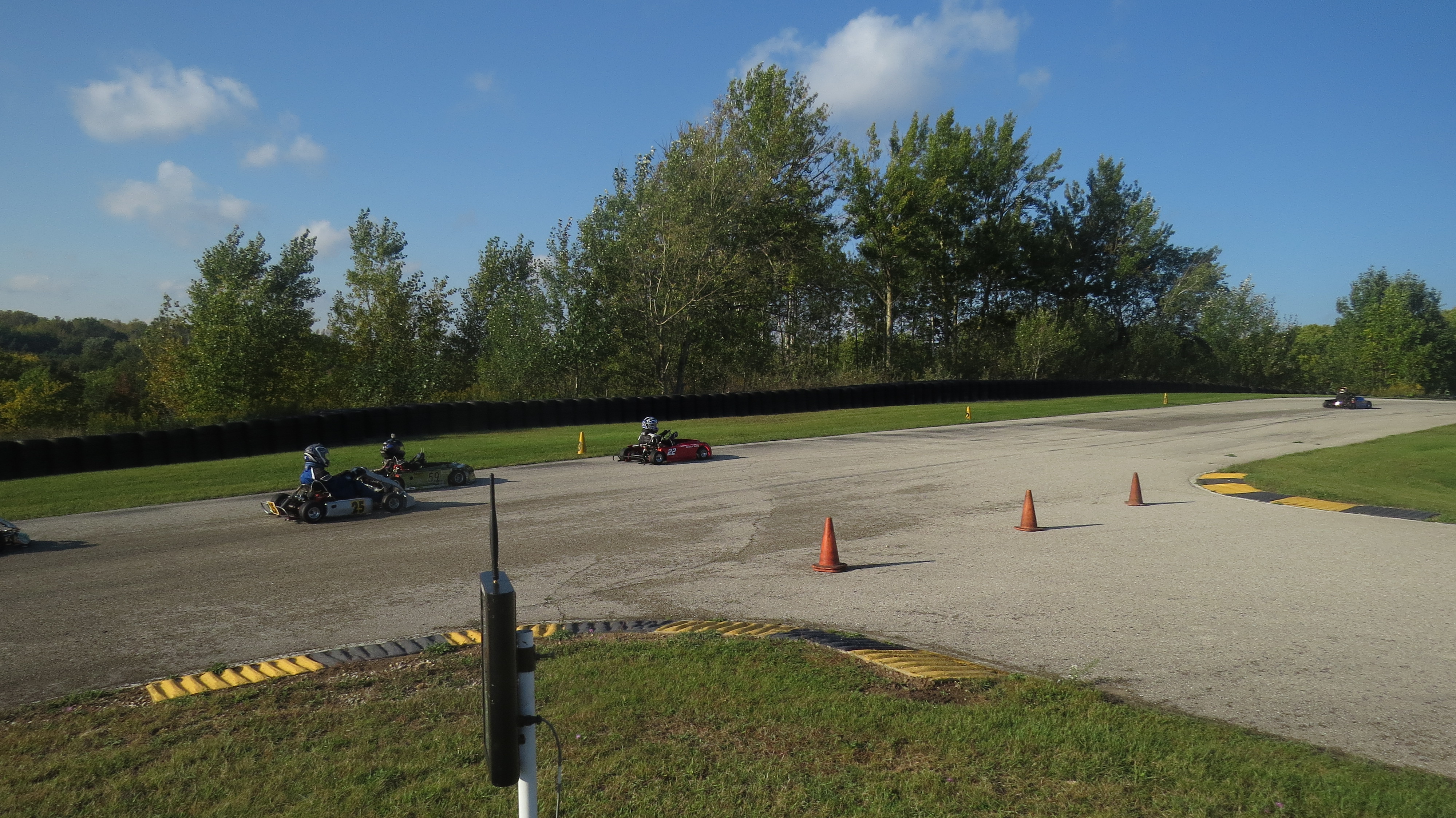 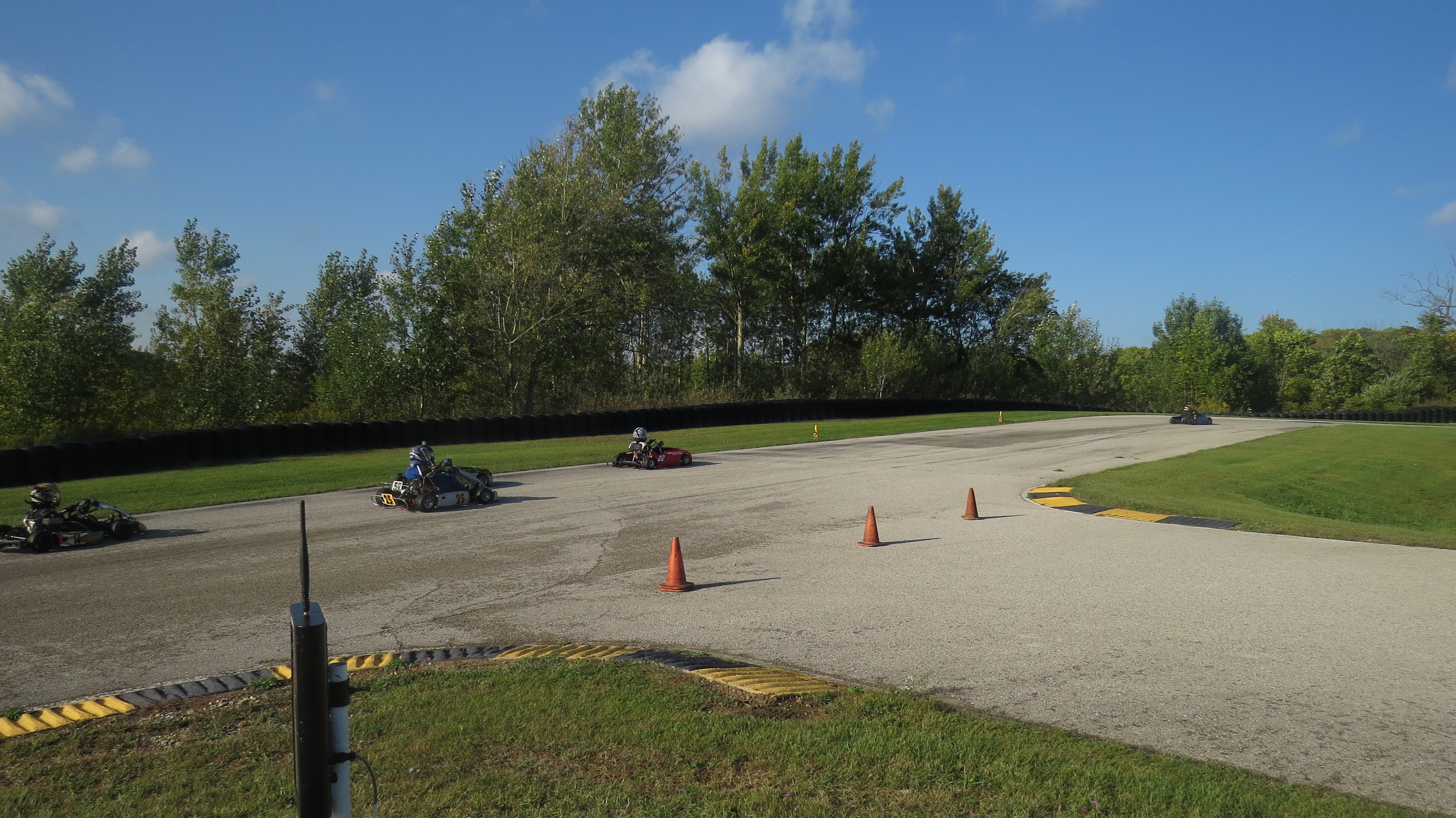 Jason started heat one in the middle of the pack which was good.  If he was slow he won’t hold anyone up.  But if he was fast he could practice passing.  It turned out he was right in the middle of the pack.  I thought hard about making any adjustments to the kart.  I did not want to make things worse.  He started 6th and finished 6th.  There was no doubt of his finishing position, and so that is where they scored him. The only real problem of the night was that our timing transponder’s battery was dead so no official lap times were counted.  As the white flag dropped on the race prior to Jason’s, I ran to the timing tower to get his transponder, waiting to the last second to get the maximum charge.  Then I’d run back to install it on his kart and start the motor.  It felt like I had no time but there was easily 2-3 minutes between classes.

Heat 2 started with him on the pole, which promised to be interesting.  He has a reputation of not being easy to pass unless you are really faster then he is.  That reputation was again earned.  The two fast drivers passed him in the first lap and then a few laps later.  The rest of the class was either left behind, not able to keep up, or not able to find a way around.  There were some sharp words between drivers at the scale but that was quickly disrupted by the need to scale the karts and move on to Frisbee by the stands.

With the sixth place finish in the first heat and the third place finish in the second heat he was placed in the sixth position behind his main rivals but in front of the rookie drivers.  He got a good start and was making progress getting around the driver in 5th.  With two laps to go, he went wide at the top of the hat as a junior class driver passed underneath him.  I thought the a junior driver shoved him off the track and was more then a little upset.  Jason got back on the track and finished the race in 6th place.  It turned out he was confused by the white flag for the junior and thought the race was over.  Oh well, not much to be done. Despite the finish in the feature, it was a pretty good night.  After the races we headed over to our good friends the Mersburgers for a relaxing evening and bed.  The next morning Jason woke to the sound of F1 races from Singapore, which also happened to be a night race.

This season is winding down, there might be a race yet at Concept Haulers but that’s it.  Time to start thinking about next year and preparing the kart for winter storage.

Thanks to the folks at Road America for the great evening of racing.  To the Mersburgers for putting us up.  Thanks