The weekend of August 12th brought us to the Championship Enduro Series, Blackhawk Farms Raceway in South Beloit, IL.  We also had many visitors this weekend and had a blast sharing the sport of karting with friends and family.  Friday, brought my aunt and her friend Jim for a night of hanging out in the pits while telling race and baseball stories.  Saturday added my cousin Dave(Ricky Bobby) and his friend Ginger.  Ginger is an former Porsche racer and instructor.  She and Jason swapped race stories and lore all day.  The weekend ended on Sunday with the arrival of my mom and sisters family.  My mom has been to a race before but this was her first road race and my sisters and family’s first race.   It was lots of fun to have all these visitors pass through our pits and share our racing passion. 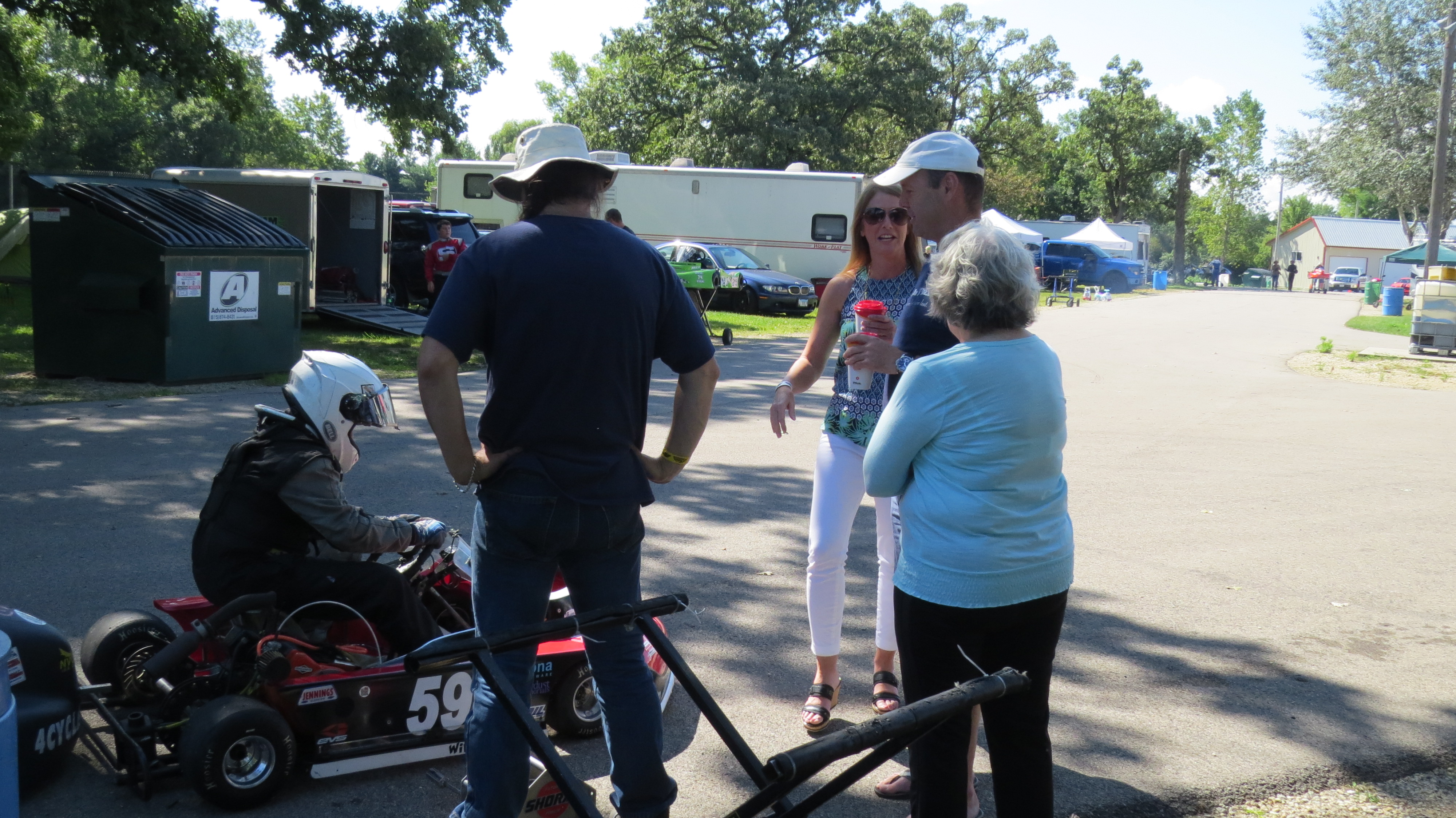 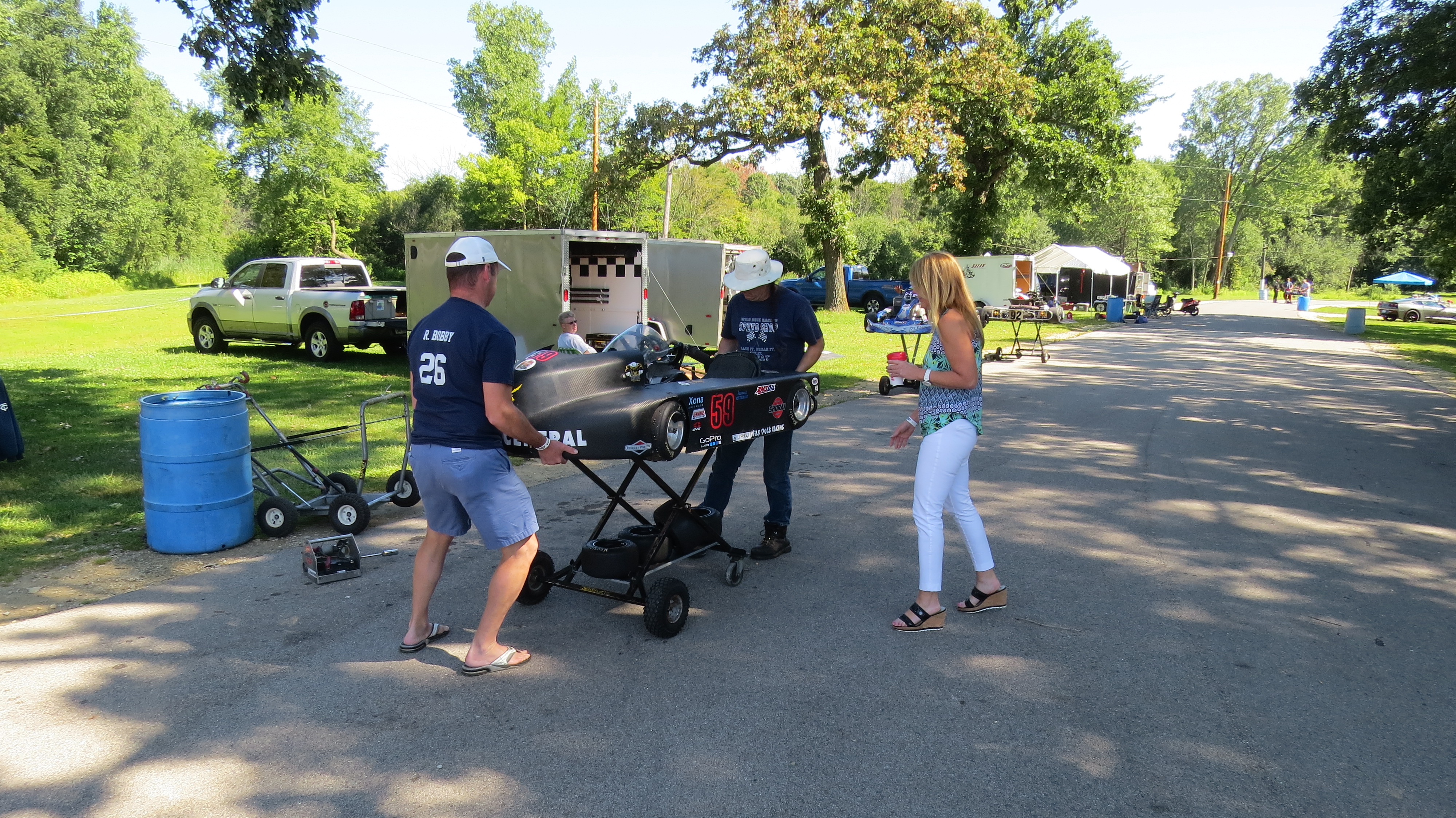 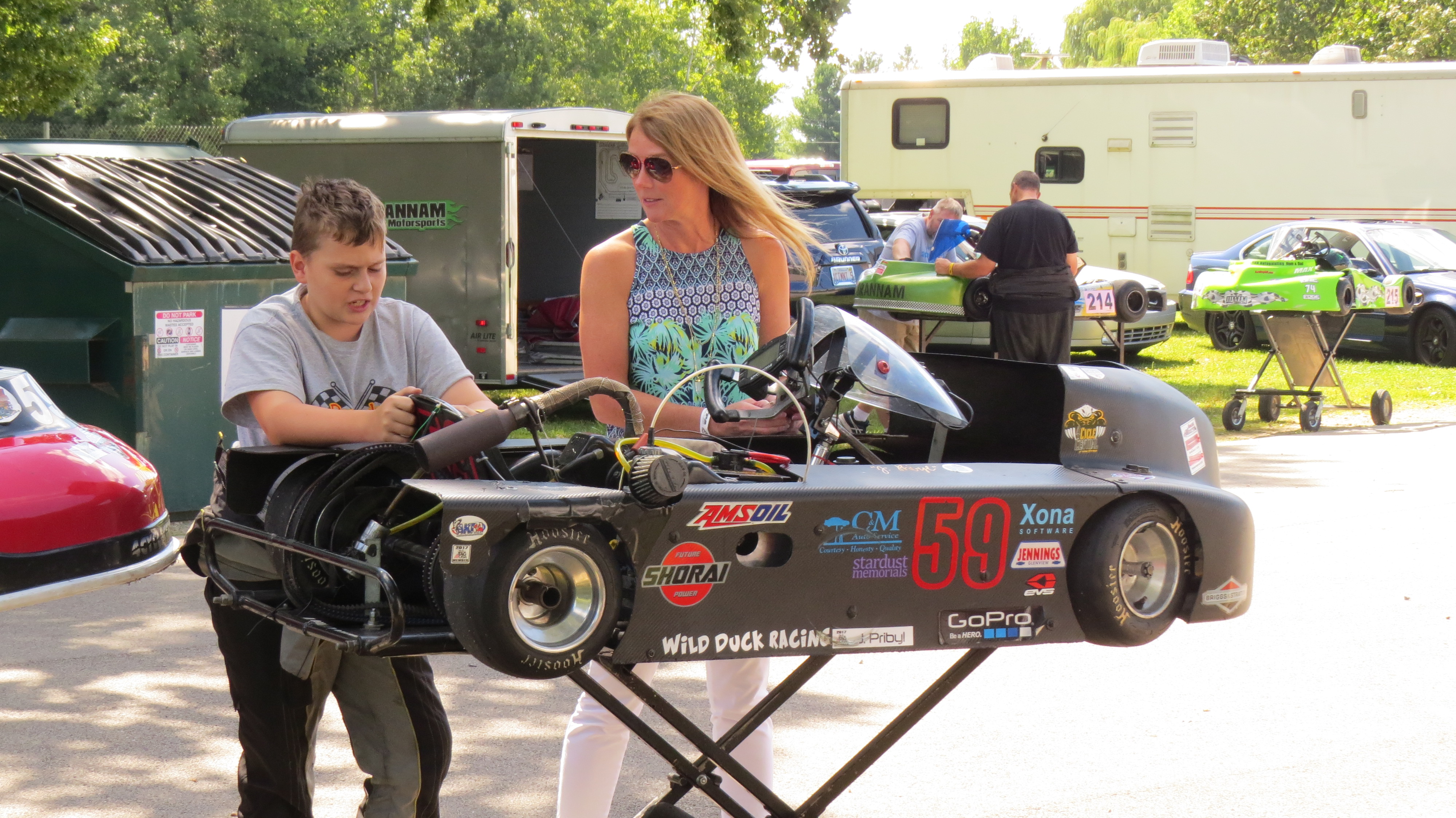 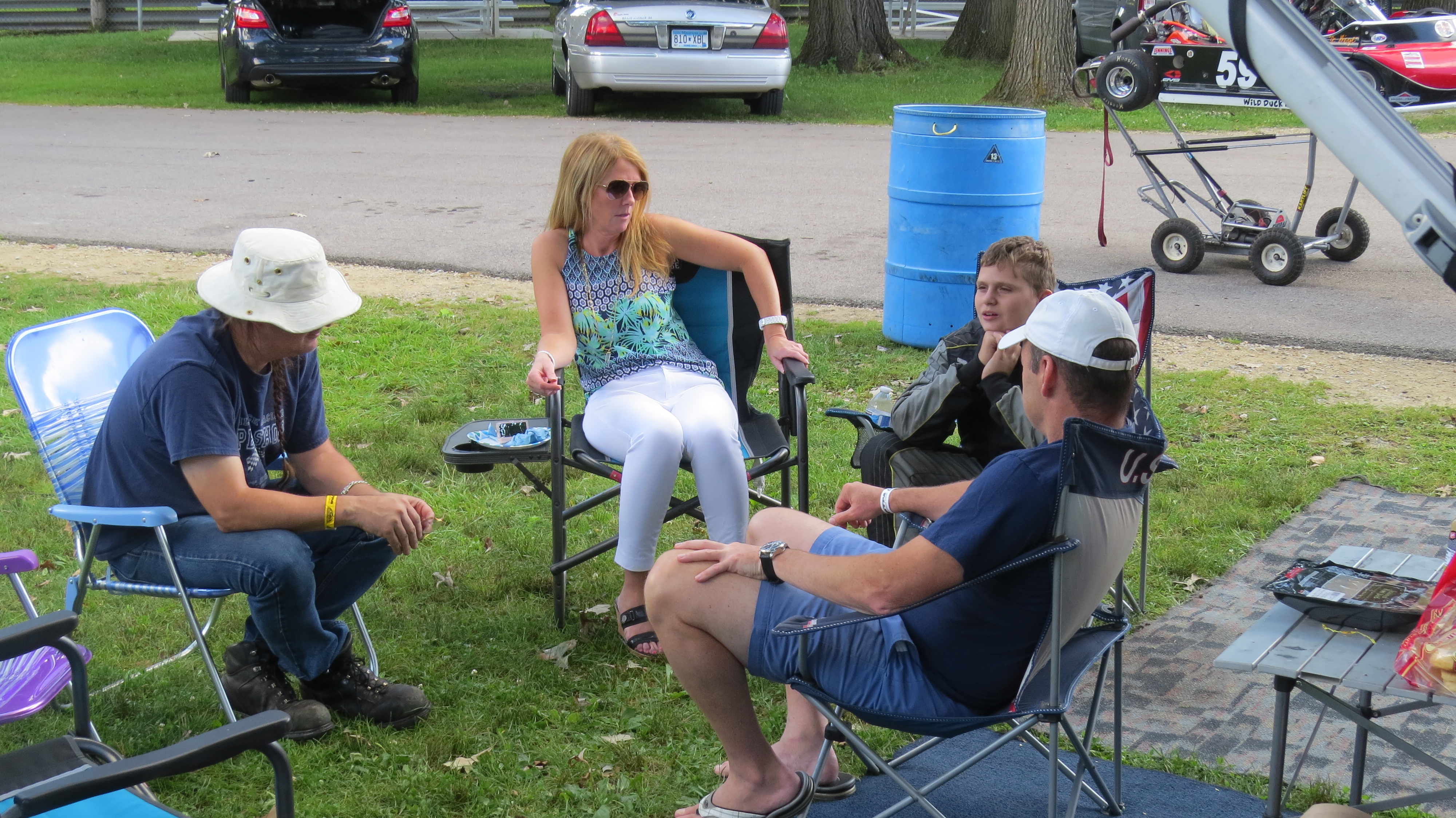 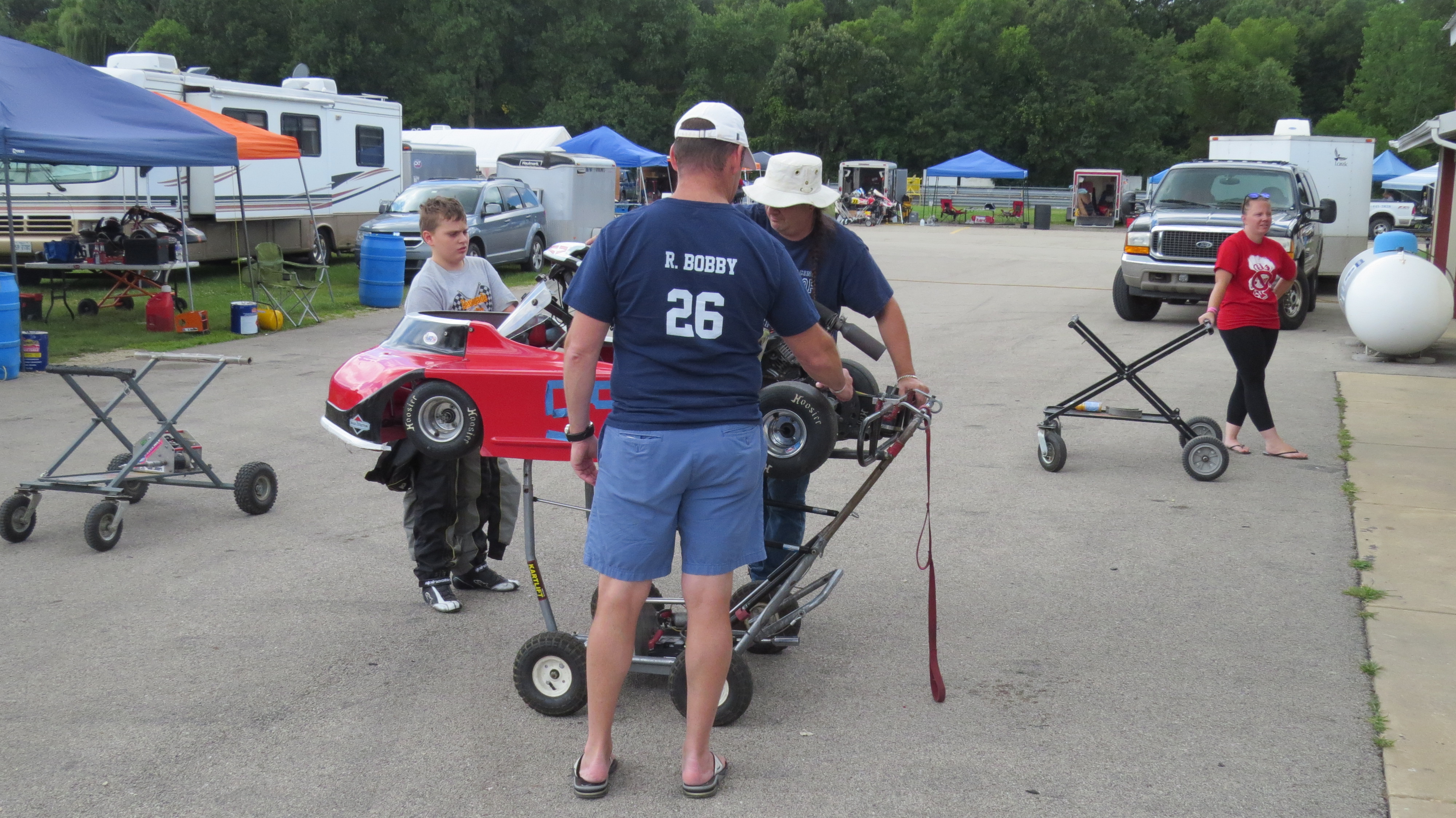 The Animal Junior racing was good in that nothing broke and Jason picked off the Animal 360 back field after make up the 10 second start gap. He won is class and finished mid pack in all four races.  The best race of the weekend was race 1 one Sunday.  This race included drivers of race 6 including Sr Super Heavy, and some folks that Jason has not raced with since for since he moved up to Junior.  Keith started with the 360s class and Jason caught up to him in a few laps and started working on finding ways to get around him.  By then Keith had gotten comfortable in his kart and was able to continually fend Jason off, often nosing just ahead as then entered turn one.  Jason would catch Keith by turn 7 again but not have quite enough steam to compete the pass, and continued to test Keith on the front straight throughout the race.  In the last lap Jason got slowed by lapped traffic and Keith beat him to the line but just a few tenths in the end.   Both came off the the track with smiles of good clean racing.

After the success at Mid-Ohio and then again at Grattan we had hoped that the road kart was going to be competitive at Blackhawk this time.  We struggled to keep up during the first Blackhawk race earlier this year.  Saturday practice went well the kart was definitely faster and Jason was working on 1:29 laps during practice.   During the race Jason as nearly 2 seconds a lap slower than the lead driver.  Sigh, guess we will try again on Sunday.  Sunday we borrowed a set of tires and wheels, which changes the setup, to see if they made a difference.  The mornings practice went much better he was closer to speed.  I made some minor adjustments to gearing and he looked good.  Between practice sessions we found the brake disk guard was broken.  This was likely a result of the crash at Gateway.  I had the part and quickly put it in.  During the last practice session all looked good, the race was a different matter.  The got three laps when he pulled in with brake failure.  While he is still getting comfortable with piloting this kart I think we are starting to fight with setup and we are making progress.

The Championship Enduro Series finale Gingerman and will include the 2016 banquet.  Jason earned 2nd place in the 2016 Animal Junior class.  As per usual we owe gratitude to the Murray’s and Regan at 4 Cycle Central for keeping our karts fast and on the track.

Remembering Joe Pribyl, without whom this would have never been possible.